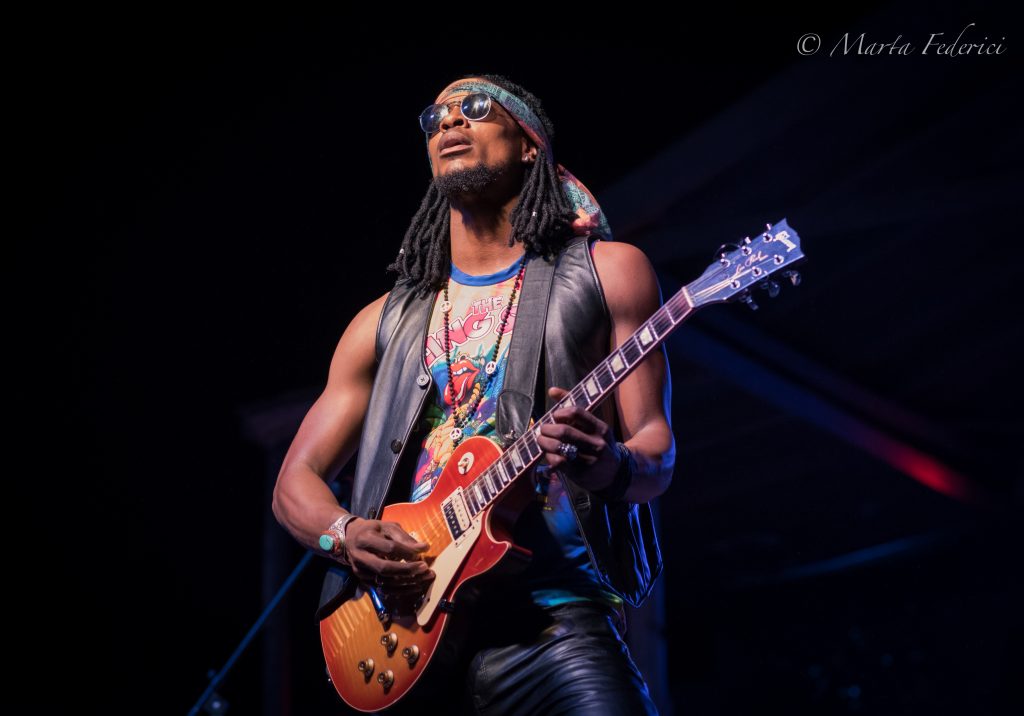 At six foot five, dark and handsome, with long dreadlocks and a cool Caribbean style, you can’t help but be drawn to Omari Banks. I meet up with Omari at Café Mediterraneo at Cuisinart Golf Resort & Spa in Anguilla, which is conveniently located next door to the famous Dune Preserve that just finished hosting its 26th annual Moonsplash festival. As we head to our table, we can’t walk but two feet without Omari exchanging warm greetings with another passerby, almost like an unofficial ambassador of Anguilla. We eventually sit down at a table in the back of the restaurant and, after ordering identical chopped salads with seared tuna, launch right into chatting about his life.

I ask about his shirt which says ‘get stoned naturally’. It turns out that he doesn’t smoke, never has, and drinks minimally. “I’ve always been very structured in things that I’ve done” he says, “and in sports I liked to be in control. I take that same kind of mentality towards my music.”

As we talk, it becomes clear that his passion for life is undeniable. And, with that, there is an intensity and drive to succeed. First, he harnessed that energy at a young age to learn cricket. By age 12, he was traveling with a team of 17 year olds who took him under their wing. He was, as he put it, “obsessed with cricket – the same way I am with my music now,” and persevered to become the first Anguillan to play Test Cricket. By the age of 27 years old, he had played cricket professionally, all over the Caribbean and in England, and had become jaded with the politics of the industry and disappointed when he wasn’t selected for certain teams. As frustration set in, he turned to what had always come naturally, music.

“When I decided to do music, I had the same drive for it as I did for cricket” he says. “Because music was such a part of me from two or three years old, I would dare to say I have even a stronger talent for music.” Indeed, Omari had been surrounded by music his entire life (his father is legendary reggae singer Bankie Banx), and he would travel with his dad abroad, singing onstage with his dad at the young age of five years old. Music was also a constant source of enjoyment and relaxation, and when he was touring with cricket, he would carry his guitar with him and write songs. He had a confidence from sports of “if I put my mind to something and dedicate my time and practice it, something can be achieved.”

Once he set his mind to starting a music career, there was no turning back. His laser focus on refining his voice, working on his songwriting, and improving his instrument playing skills (he plays the base, guitar and drums) culminated in his debut album Move On, aptly titled to express his sentiments of moving on from his cricket career. The album is full of moving tracks, including a collaboration with Grammy-winning artist Peetah Morgan on the song No Point To Prove, the songSomaya dedicated to his sweet 4 year old daughter, and the powerful title trackMove On. His music is dynamic and has many influences. “Folk music resonates with me because I’m a storyteller, blues music because it touches the soul, and jazz music for its complexity. My music is a fusion of all of them, with the base being reggae music.” Although he’s frequently traveling for work (he most recently performed in the SXSW Music Festival in Austin, Texas), he is now back in Anguilla after just performing at Moonsplash, where he played both current hits and new songs. A memorable moment of the night included a duet with his father Bankie where they gave a soulful tribute to Prince with a beautiful rendition of the song Purple Rain. I spoke to Bankie, and he couldn’t be more proud of his son. “He’s a great singer-songwriter,” says Bankie, “and he’s working very hard and is very brave.”

The feeling is mutual. Omari has great respect for his father and, although they both have strong personalities and sometimes clash, he is close with his father and views him as a role model, as he does his mother, who instilled in him the values of perseverance and hard work and encouraged him to read motivational self-help books as he was growing up. “I have to give my mom, who was a big disciplinarian, a lot of credit for molding me into who I am. I’m not the kind of person to be complacent.”

Those values have helped him on his musical journey as Omari acknowledges that the road hasn’t always been easy. “It’s a lot of hard work. You have to constantly practice to be able to express yourself onstage. And you have to have a plan and work towards it. My overall outlook is that you take each day for what it is and grow piece by piece. There are ten million ways to do the same thing; I have to feel comfortable that, as Frank Sinatra says, ‘I did it my way’.”

As far as Omari’s advice for future artists, “Work hard and be independent by learning to play instruments because it opens up so many doors. That way, you can make money by playing without relying on others. Read. Have discipline. Have fun because it’s easy to forget that the emotional connection to the music needs to be real in order to connect with people. When you are having fun, people will pick up on that vibe.”

He is currently working on his next album (which is expected to drop later this year) and just released a new single, System Set. I ask him what we can expect to hear on the upcoming album. “I have a better idea of what I want my music to sound like now. This new album will be more refined in terms of my vocal ability. I will collaborate with other producers, and it will be marketed even better as I have more contacts to make things happen. People recognize me better for my music now; I’ve gotten over that hump of them recognizing me for my cricketer status.”

And with that, we say goodbye, as it was time for Omari to move on.

Find out more about Omari Banks by clicking here.